The First Meeting of the NZSG

The New Zealand Society of Gastroenterology was founded during a meeting of the Royal Australasian College of Physicians held in Auckland, 16–19 February 1966. Dr Alan Cameron was the Foundation President. The Society remains closely associated with the RACP.

The New Zealand Society of Gastroenterology was born during a meeting of the Royal Australasian College of Physicians held in Auckland, 16–19 February 1966.

After some general discussion it was moved that a steering committee consisting of Dr Cameron, chairman, Dr Jones, secretary and Dr. Scobie should be appointed to bring forward definite proposals for a further meeting to be held in association with the September meeting of the College of Physicians in Wellington, the interim committee to have power to co-opt.

As a result of general discussion, it was felt that the newly formed group should be based on the Royal College of Physicians but that it should include surgical members of the profession and other specialist groups in the profession such as radiologists and pathologists. It should also have provision for people interested in other veterinary or biological sciences who may have something to contribute to such a group. It was felt that the meetings should be in association with the College of Physicians meetings and that the composition of the group should be such that it would be principally controlled by physicians.

It was left to the steering committee to decide whether the September meeting should be purely business or should include papers.

Dr Cameron ended the business section with a brief review of the history of development of gastroenterology at Green Lane Hospital.

After this a series of scientific papers were presented.

The first paper was presented by Dr. Gordon Nicholson and was entitled “The Metascopic Appearances of the Small Bowel”. This was a beautifully illustrated lecture showing the value of postmortem in furthering our understanding of small bowel villous structure.
Dr C Tasman Jones presented a paper on disaccharidase deficiencies. The histories of four patients who appeared to have a primary lactase deficiency with a fifth patient who had a primary sucrose deficiency were presented.
Dr W D Troughton presented a paper on amino acid absorption. He briefly reviewed the problems of perfusion amino acid studies as undertaken while he has been a Research Fellow at Green Lane Hospital. He was able to clearly illustrate some of the difficulties and the encouragements from such perfusion studies.
Afternoon tea was served through the courtesy of Green Lane Hospital by Mrs Rosemary Lindop.

Dr. Brian Scobie presented a paper on gastric function following gastric surgery. This paper illustrated the value of the augmented histamine test in solving post-gastrectomy problems.
After the scientific meeting, people were taken on a short tour to see the Gastroenterology Clinic equipment at Green Lane and also to see a demonstration of dissection photomicrography.
Dr Alan Donaldson Cameron became the Foundation President of the New Zealand Society of Gastroenterology.

The President's Badge of Office

In 1976, the Gastroenterological Society of Australia presented to the NZSG the President's Badge of Office as a token of goodwill. The form of the badge is a representation of the Kiwi alimentary tract, made in silver, and bearing the name Apteryx, which is the genus to which the kiwi belongs. The badge was presented in a red box, representing blood, and the ribbon is green representing bile, both important in gastroenterology. The silver of the badge also has gastroenterological meaning as silver salts were an early remedy for gastric disorders. 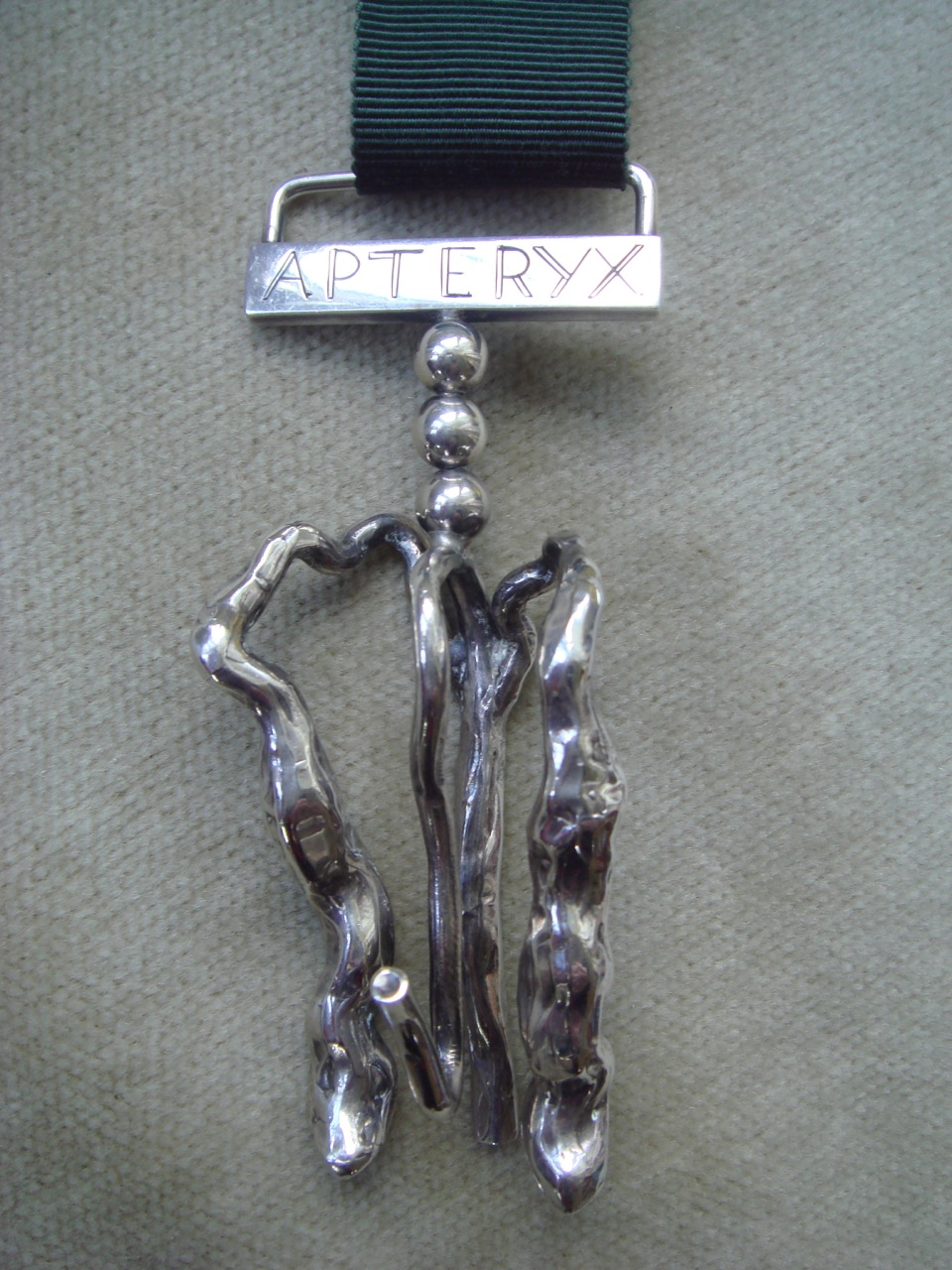 In his speech Dr Billington described the badge of office:

On behalf of the Gastroenterological Society of Australia I would like to make a presentation to the President of the New Zealand Society, as a token of goodwill.

It seemed that New Zealand Gastroenterology could be represented in the form of a President’s badge of office.

It has a green ribbon to signify the bile, for hepatobiliary disorders constitute an important area in gastroenterology.

The badge bears the name ‘Apteryx’ which I am informed, is the name of the genus to which the kiwi belongs, a living bird with several species, i.e. with differing and variable types. (it was interesting that the smith, better educated then I, understood to what ‘Apteryx’ referred).

To signify the stomach, it seemed that the badge should be in silver, as silver has particular associations with the stomach. Silver nitrate was long used as the agent for titrating the chloride content of gastric juice. Moreover at the time New Zealand was being colonised and was beginning to develop silver salts were used as a symptomatic remedy for gastric disorders (1).

The form of the badge is a representation of the other end of the Kiwi’s alimentary tract. It took quite a lot of searching by Mrs. Holster, the Librarian of the College of Physicians in Sydney, after I had failed to find any diagram of the Kiwi’s alimentary tract. She found the reference in a 1975 book published in Switzerland (2). You will see that it shows the central column of rectum from which arise two caeca which pass down lateral to it. Before the rectum passes into Meckels tract (or small intestine), there is in Kiwis a loop, represented in the badge, passing forwards, down and up again. This loop in the intact animal comes to lie above the duodenum and is therefore called the supra-duodenal loop, and it is this loop which is characteristic and specific of the Kiwi.

Armed with a line diagram, the badge was made for us by a silversmith, Baron Wal Von Heckeren of Sydney, and I hope that you will accept and wear it as representing New Zealand Gastroenterology which we hold in great respect in Australia.